Yesterday was day seven which means I have survived a full week and lived to tell about it.  I have come to a few realizations that I have documented over the past week and I have made some progress.  Overall I am very happy with the way things are going and hope to keep up the momentum (even though I have a buddy who doesn't believe that momentum actually exists).

Yes, the FatManinVegas is slightly less fat after his first week of dedication (again).


So lets get to the results and see what happened.

Note - The foot pictures will be gone for a bit because I'm also a LazyManinVegas :)

Actually, the real reason is last night when I came home I came home determined to get my Aria scale working with my Fitbit again which means that when I step on the scale it automatically updates my weight on my fitbit app.  I'm probably going to just start doing my weigh-ins in the morning because keeping track of morning and night is tedious. 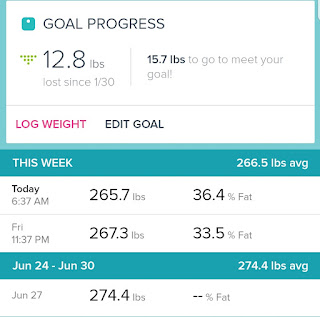 Starting weight on June 27th (weighed in before I started this site and detailing my journey) was 274.4 and this morning I am sitting at 265.7.   If it wasn't for the 4th of July pig out celebration I probably could have been at my first 10 pounds lost but that celebration will come in the very near future!

As you can see my Goal Progress on Fitbit states I am down 12.8 pounds and I have weight data on Fitbit going back to 2013 but it won't let me delete everything and just start over.  I tried but it only lets me delete one entry at a time.  However, looking at that number alone show's you just how long I have hovered around the same weight.

My buddy from Twitter Ryan Craig asked "I love your openness and transparency with your diet journey. I would be interested in knowing how much money you are saving by "not" stopping at Jack in the box or KFC for random snackage."

That is actually a great question because financial gain will also come from freeing myself from late night cravings and snacking.  I figure my average trip to Jack in the Box probably weighed in around $10 when all was considered.   My average trip to Sonic was closer to $3 but I was only getting a hot fudge sundae with peanut butter added or a large shake but at half price because of the time of day.  Let's assume that I was making 3 stops a week (only during work nights and not every night) so we'll put that at $16 per week and $64 per month.

Now, this is not including my stops at 7-11 on the way to work to grab some energy drinks AND some snacks for the ride.  You know, because I can't make it 30 minutes in a car without eating a bag of chips or something.  Those stops were pretty much daily and the snack portion of my stop alone I'll put at $1.50 which jumps to $7.50 per week.  This equates to another $30 per month and now my running total is sitting at $94 per month.

We haven't started at my other addiction which is the energy drinks and honestly those have been all over the place recently with trying out new brands and new flavors and buying different quantities.  So, I'm going to rest on the old fashioned Rock Star pricing at buy 2 for $3.50 and that should probably be pretty close to average.  So that's $17.50 per week and $70 per month which now brings my total to $164 per month.  None of this takes into if I decided to eat lunch at work instead of bringing food or anything else.  So, you can safely assume that I was spending upwards of $200 per month in food or snacks of some sort.  Oddly enough I was giving myself an allowance of $100 every paycheck and now that I type all of this out I can see why I never had any money left over at the end of the month.  Yeah.

I'm not completely past everything and I still have some slippage here and there but in due time all of it will be cut out for different options, healthier options and/or cheaper options.

That was an eye opening couple of paragraphs.  Thank you Ryan for the great question and I hope my detail didn't bore you to tears!

I was going to end with my shame pictures but I think that will be in my next post instead.  I took a front facing one and a side facing one.  But, in order to see the body transformation over time you have to take before pictures as well or none of it has any context.

So, I'll gross you out next time. 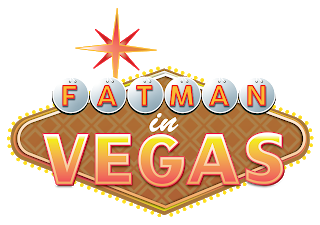