Showing posts from December, 2020
Show all

Countdown to Walk The Year 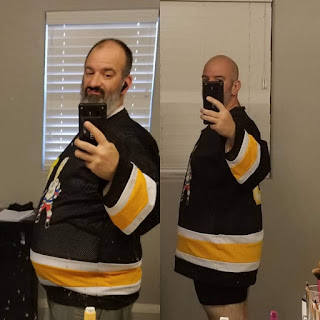 If you pop on over to google and type in Run the Year or Run the Edge you'll come across a company who has a unique virtual event that lasts the full year in which your goal is to get in the same amount of miles as the year. As soon as I saw it I knew that this would be a great challenge for me to partake in for 2021 to continue my fitness goals.  75Hard was great and I made some amazing strides over the course of it, so I definitely wanted to keep finding ways to push myself into the new year so that I don't fall back into my old routines.  Run the Year is that challenge, even though I will be walking most of it. If you sign up and I still have open spaces you can feel free to join my team, just search for #Backloggers. While it is set up to do 2021 miles as a team my goal is to do the miles by myself. Since ending 75Hard I have lost an additional 5 pounds and I am pushing hard to get myself to 230 by the time the new year rolls in.  There is no real reason why except it is
Post a Comment
Read more

- December 15, 2020
Over the course of #75Hard I have been getting in a lot more steps as a natural result of walking more.  So, I got to thinking and was curious what my numbers looked like over previous years when I was not doing the program. Looking at past data is always fun for me and I didn't realize that I have been using a Fitbit since 2013.  In fact, I have all of the same time period for 2013 - 2019 except one year where I broke a Fitbit and didn't replace it because I had such sever Plantar Fasciitis that I could barely walk and didn't care. I'm going to put this data in the form of Steps and Miles during my 75Hard time frame (October 1st - December 14th) and then what I did for the entire year.  Obviously when I get to 2020 I won't be able to put the year data since it is not over yet but I will make it as up-to-date as possible. 2013: 75Hard - 857,361 Steps and 388 Miles Year - 1,706,93 Steps and 777.46 Miles I got my Fitbit in August so these stats are reflective of Augu
6 comments
Read more

I'm not quite at the end of my journey for #75Hard but the end is rapidly approaching.  When I wake up tomorrow I will have 8 more days left of the challenge and I am really looking forward to ordering up my reward for a job well done.   Last year I put in a half-assed attempt at 75 Hard without really knowing anything about the challenge other than a set of rules to do for 75 days straight.  A friend had gone through it with some modifications and I though why the hell not!  I have the ability to do a 75 day challenge, I'll just change a few rules here and there to fit it into my lifestyle. Even with modifications to make it easier on myself I failed.  I attempted to half-ass something and came up empty, then thought nothing about it. Fast forward to September 2020 and my wife has been watching videos on the Tube of You of people going through the challenge or who had previously done it.  She had passing interest and this sparked something in me that I really can't expla
4 comments
Read more

- December 02, 2020
It has been a while since I did an update here.  My intentions were to come back and give a weekly summary of my thoughts, emotions, fears and foods every week as I went through this journey. Today is Day 63 of my journey and I am less than two weeks away from completing the program.  This program truly feels like it has been life changing for me in a number of ways. First, I am firmly into the routine of getting my exercise in every single day.  My work lunch time will never be the same.  Even after I am done with #75Hard I plan on keeping this routine going.  In addition, starting at the beginning of February I plan on adding a gym membership.  One of my co-workers who works the same shift as I do goes to the gym after work for 30 minutes to an hour and is doing the same thing I am, just trying to get healthy.  Once February rolls around I plan on jumping on board with him and the days that he and I work together I'll hit the gym after work for some cardio and some strength trai
Post a Comment
Read more
More posts